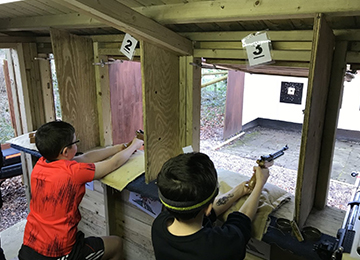 In April, the annual scout intercounty target shooting competition will be held at the West Midlands Regional Target Shooting Centre in Aldersley, Wolverhampton. The competition focuses on the Olympic shooting disciplines of 10 metre Air Rifle and Air Pistol. Teams of 8 Scouts from around the UK will compete with the best competitors being potentially invited to join national squads.

In preparation for this competition Greater Manchester East Scout County held a selection event for scouts from across East Manchester to find a team of young people to represent the county.

On a cold Saturday March morning, 22 young people made the trip to Linnet Clough Scout Activity Centre to compete in Air Rifle and Air Pistol. For many this was the first time using an Air Pistol or using a compressed air rifle and competition sights.

Olympic 10 metre Air Rifle/Pistol shooting takes discipline, focus, attention to detail and patience to do well, all valuable skills that scouts can be taken forward into later life.

All the young people took the competition in a serious and mature manner and completed their shooting successfully with some interesting inter group, inter section and sibling rivalry. The day threw up some surprises, with the youngest shooter on the day at 10 years old from Ashton-under-Lyne coming third having only recently moved up from cub scouts.

The eight top scoring young people were then selected to represent their scout county, with 4 reserve names.

The team will now go forward to travel to Wolverhampton and represent Greater Manchester East Scout County. The first time that the county has been represented in this competition. Everyone is now looking forward to the experience of the competition.

The event could not have happened without the kind support of Parents, Scout Leaders, Linnet Clough Activity Centre, GME Scout County or British Shooting.

If you would like the opportunity to take part in sport through scouting contact [email protected] 07931765120 or go to www.gmescouts.org.uk/join

Not sure if its for you? Arrange to have a look around the club!